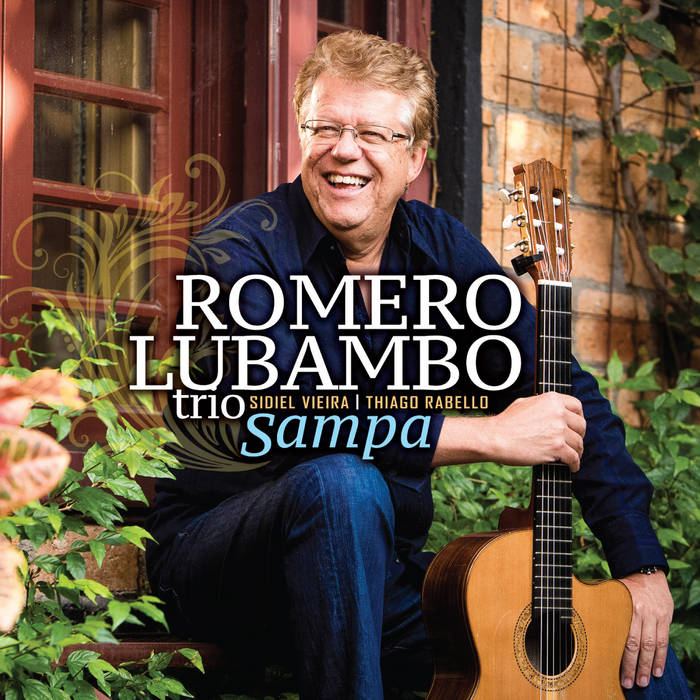 Not many musicians are more enthusiastic about performance and collaborations than Romero Lubambo is. The virtuoso guitarist has been based in the United States for decades but regularly makes it back to his native Brazil for innumerable projects with musicians of all sorts.

On one of these trips, Lubambo met drummer Thiago Rabello. The Rio de Janeiro born Lubambo was greatly impressed by the percussionist from São Paulo during a weeklong residency in Bahia. So when the guitarist was scheduled to perform in São Paulo shortly thereafter, he naturally reached out to Rabello to be his drummer and to help find a bassist. It was with the suggestion and addition of Sidiel Vieira that Lubambo’s Brazilian trio became whole.

In Rabello and Vieira, Lubambo found two musicians who are excellent players and fantastic people. Upon his arrival in Brazil, Lubambo found that his trio mates had not only learned his music but had memorized it, requiring only one rehearsal before they were able to take their music on the road. The trio’s rapport can be heard on their new recording Sampa, an energetic and diverse program recorded in São Paulo (the title being a local colloquialism for the city’s name) at Rabello’s recording studio.

The recording features Lubambo mainly on acoustic nylon string guitar, though he does record a couple of pieces with his solid body Les Paul, an instrument he keeps in Brazil to play for his more electric guitar savvy fans. The music is a mixture of Brazilian music, like bossa nova and forró, and jazz with a little blues mixed in.

The program begins with accordion legend Dominguinhos’s “Gostoso Demais,” an incredibly popular song in Brazil that the trio plays in a hazily insistent manner. The trio shows its dexterity on Mauricio Einhorn and Durval Ferreira’s “Estamos Aí,” a fun piece from the bossa nova era that’s title means “ready for anything.” “Contrato De Separação” is a beautiful Dominguinhos composition about trying to separate oneself from saudade, the nostalgic longing, for someone who is gone, and is appropriately melancholy. The electric guitar is in full swing on Lubambo’s “New Slash Blues,” a grooving piece showing Lubambo’s unfiltered side.

“Paquito In Bremen” is Lubambo’s moving tribute to friend and woodwind maestro Paquito D’Rivera, revisited here in an expanded trio setting. Lubambo’s “P’ro Flavio” is a spirited piece written in the Baião style of northeastern Brazil for the guitarist’s super supportive father. The lovely “Nature’s Beauty” was written by Lubambo and his wife, Pamela Driggs, for their then three year-old daughter. The electric guitar is back on the second line flavored “Dipper Mouth,” a tune from the pen of Lubambo’s “American father,” Herbie Mann.

“Luisa” is another moving lilting tribute to Lubambo’s daughter that he wrote more recently. Lubambo and Paulo Cesar Pinheiro’s dedication to Brazilian legend João Donato, “For Donato,” utilizes a Brazilian meets Latin rhythm that the pianist has used throughout his storied career. The album concludes with another touching ballad entitled “Song For Kaya,” which the guitarist wrote many years ago while on tour with Harry Belafonte.

Guitarist Romero Lubambo regularly makes music that moves listeners with its soul and effervescence. Thus, his meeting with two incredible São Paulo based musicians, Thiago Rabello and Sidiel Vieira, on their new recording Sampa is inspiring and exciting.

Bandcamp Daily  your guide to the world of Bandcamp